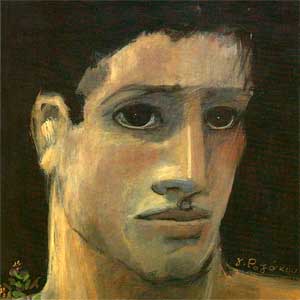 Michael “Mikis” Theodorakis (born 29 July 1925) is a Greek composer and lyricist who has contributed to contemporary Greek music with over 1000 works.

He scored for the films Zorba the Greek (1964), Z (1969), and Serpico (1973). He composed the “Mauthausen Trilogy” also known as “The Ballad of Mauthausen”, which has been described as the “most beautiful musical work ever written about the Holocaust” and possibly his best work. He is viewed as Greece’s best-known living composer. He was awarded the Lenin Peace Prize.

Politically, he is associated with the left because of his long-standing ties to the Communist Party of Greece. He was an MP for the KKE from 1981-90. Nevertheless, in 1989 he ran as an independent candidate within the centre-right New Democracy party, in order for the country to emerge from the political crisis that had been created due to the numerous scandals of the government of Andreas Papandreou, and helped establish a large coalition between conservatives, socialists and leftists. In 1990 he was elected to the parliament (as in 1964 and 1981), became a government minister under Constantine Mitsotakis, and fought against drugs and terrorism and for culture, education and better relations between Greece and Turkey. He continued to speak out in favor of left-liberal causes, Greek–Turkish–Cypriot relations, and against the War in Iraq. He has consistently opposed oppressive regimes and was a key voice against the 1967–74 Greek junta, which imprisoned him and banned his songs.