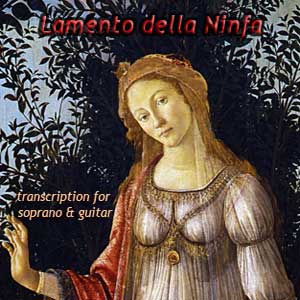 Caravaggio’s representation of the woman figure isolated in a circle/oval of grief in La Morte della Virgine or of remorse as in the previous portrait of Maddalena Penitente, could find, as mentioned in the second part, its musical translation with the closed and isolated character of the Lamento d’Arianna.

Thirty years later, the three parts of the Lamento di Ninfa included in the Eighth Book Madrigali guerrieri et amorosi, make a clear contrast with the almost direct musical response to the syntactic structure and emotional impact of Rinuccini’s words in the Lamento d’Arianna. After the incursion in the exploration of the surface and the senses inspired by Guarini and Marino’s poetry in his Concerto, Monteverdi turns again to a traditional form and goes back to the darker themes of lamentation of his Sixth Book.