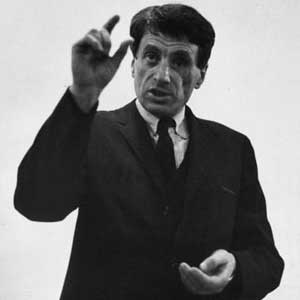 Kottos – 1976. ‘Kottos was written as the required piece for the Rostropovitch competition, organised by Claude Samuel at La Rochelle, France in 1977. Kottos is a quite difficult work, but a work which has shown that the level of young violoncellists today is perfectly capable of mastering the necessary technique and of expressing its musicality.

‘Kottos’ is one of the three Giants (Sons of Ouranos, the Sky, and of Gaia, the Earth). Each one had hundred arms and fifty heads. They were the allies of Zeus in his fight against the Titans that where eventually defeated; allusion to the fury and the virtuosity necessary to the performance of this piece.’

Xenakis evoked the dramatic power of the myth in the physical force imposed by the playing itself, writing on the boundaries of the unplayable, culminating in an ‘unplayable’ but not ‘unperformable’ grand toccata. Like a mythical warrior armed with his ‘bow’, the performer will defeat the grillage of notes: dancing, leaping and furiously beating on the strings. An athletic approach to the act of playing itself is the start and end point of a very well thought-out choreography between fingers and bow, between left and right hand. Virtuosity as a ‘calculated’ ecstatic catastrophe.

Kottos is the bestial force in music, summing the animal in the cello’s voice. The bow pulls, grates and slashes the tones out of the strings, ‘each note very heavy at the frog, going from a beating to a rubbing motion’. Xenakis writes in the score: ‘In general: the sounds, except for the harmonics, should not be beautiful or nice in the usual sense, but rough, harsh and full of noise’. Who plays Kottos surpasses himself and becomes Kottos. Crushing energy released.