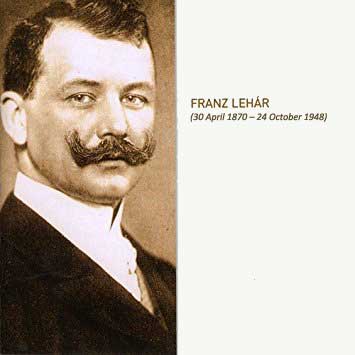 Franz Lehár (30 April 1870 – 24 October 1948) was an Austro-Hungarian composer. He is mainly known for his operettas, of which the most successful and best known is The Merry Widow (Die lustige Witwe).

Lehár and the Third Reich

Lehár’s relationship with the Nazi regime was an uneasy one. He had always used Jewish librettists for his operas and had been part of the cultural milieu in Vienna which included a significant Jewish contingent. Further, although Lehár was Roman Catholic, his wife, Sophie (née Paschkis) had been Jewish before her conversion to Catholicism upon marriage, and this was sufficient to generate hostility towards them personally and towards his work. Hitler enjoyed Lehár’s music, and hostility diminished across Germany after Joseph Goebbels’ intervention on Lehár’s part. In 1938 Mrs. Lehár was given the status of “Ehrenarierin” (honorary Aryan by marriage). Nonetheless, attempts were made at least once to have her deported. The Nazi regime was aware of the uses of Lehár’s music for propaganda purposes: concerts of his music were given in occupied Paris in 1941. Even so, Lehár’s influence was limited. It is alleged that he tried personally to secure Hitler’s guarantee of the safety of one of his librettists, Fritz Löhner-Beda, but he was not able to prevent the murder of Beda in Auschwitz-III. He also tried to prevent the arrest of Louis Treumann, the first Danilo in The Merry Widow, but the 70-year old Treumann and his wife Stefanie were sent to Theresienstadt concentration camp on 28 July 1942, where Stefanie died in September and Louis died on 5 March 1943.

On 12 January 1939 and 30 April 1940 Lehár personally received awards from Hitler in Berlin and Vienna, including the Goethe Medal. On Hitler’s birthday in 1938 Lehár had given him as a special gift a red Morocco leather volume in commemoration of the 50th performance of The Merry Widow.