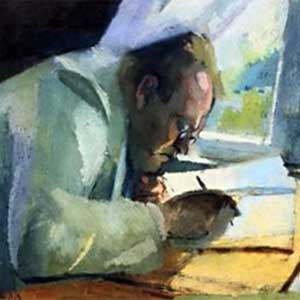 Arthur-Vincent Lourié, born Naum Izrailevich Luria, later changed his name to Artur Sergeyevich Luriye (14 May 1892 in Propoysk – 12 October 1966 in Princeton, New Jersey) is a significant Russian composer. Lourié played an important role in the earliest stages of the organization of Soviet music after the 1917 Revolution but later went into exile. His music reflects his close connections with contemporary writers and artists, and also his close relationship with Igor Stravinsky.

After the Revolution of 1917 Lourié served under Lunacharsky as head of the music division of the Commissariat of Popular Enlightenment (Narkompros). For a while he shared a house with Serge Sudeikin and his wife Vera Sudeikina. Though his sympathies were initially Leftist he became increasingly disenchanted with the new order in Russia. In 1921 he went on an official visit to Berlin, where he befriended Busoni, and from which he failed to return. His works were thereafter proscribed in the USSR. In 1922 he settled in Paris, where he became friends with the philosopher Jacques Maritain and was introduced to Stravinsky by Vera Sudeykina.

When the Germans occupied Paris in 1940, Lourié fled to the USA, assisted by Serge Koussevitzky. He settled in New York. He wrote some film scores but gained almost no performances for his more serious works, though he continued to compose.