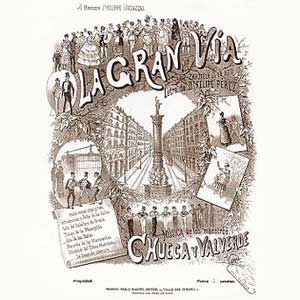 ‘La Gran Vía’, magazine lyric-comic, fantastic-street in an act (original full title of the work) is a ‘zarzuela’ in one act and five scenes with music teachers Federico Chueca and Joaquín Valverde and libretto by Felipe Pérez y González released in the Felipe Theater of Madrid the 2 of July of 1886 and later represented long in the Apollo Theater. It reached so much fame, that some pictures had to be changed, since to be a magazine of news, this one had to be modernized.

The music is an exponent of the melodic ease of Federico Chueca and Joaquín Valverde, creating numbers that connect with the public like «La jota de los ratas», «El Tango de la Menegilda» and «La mazurca de los marineritos».